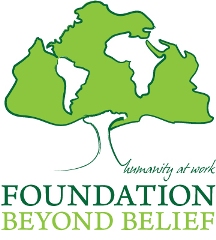 I am delighted to announce the launch of a new humanist-driven charity initiative, the Foundation Beyond Belief. Go to the site itself for full details, and to sign up.

I'm just going to point out some of the things about the Foundation that I find particularly awesome:
I look forward to seeing the Foundation help people around the world, and I'm excited to participate in it. I'll close with words from the Foundation itself: a mission statement, a launch blurb, and a video:

To demonstrate humanism at its best by supporting efforts to improve this world and this life; to challenge humanists to embody the highest principles of humanism, including mutual care and responsibility; and to help and encourage humanist parents to raise confident children with open minds and compassionate hearts.

Beginning on January 1, 2010, Foundation Beyond Belief will highlight ten charitable organizations per quarter -- one in each of ten categories. Among other considerations, beneficiaries will be chosen for efficiency, effectiveness, moderate size (annual budget <$10M), compatibility with humanist focus on mutual care of this world and this life, no direct promotion or proselytizing of a particular worldview, and geographical diversity.