I would like to introduce you to a hero of mine. His name is Robert Lang.

And that is enough to earn him my admiration (as an amateur folder myself).

But what really rockets him into the ranks of hero is his polymath tendencies. What he has done with his origami outside the traditional world of paper folding.

He has developed mathematical models of origami. His scientific approach has advanced the art to the point that most of the new forms created today would have been impossible half a century ago. But more than that, he has consulted on scientific and engineering projects, bringing the art of folding into space telescopes, car safety, and other areas.

He has given a TED talk; he has been featured in National Geographic.

Robert Lang inspires me. Not only is he an excellent origami artist - something I aspire to in a vague and occasional way. He has also managed to combine various interests of his into a unified and revolutionary whole - something I yearn for in an definite, persistent way.

As someone with a variety of disparate interests (experimental phonetics, computer programming, writing, parenting, humanist spirituality), I would love to bring some of them together, so that I am not always forced to choose to spend time on one at the expense of others.

So much for why I admire Robert Lang. But what does it mean for someone to be a hero?

Robert Lang has at least two attributes that make him a hero for me: he does something I would like to be able to do myself, and he inspires me to actually try to achieve it. 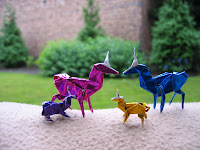 It's not necessarily origami - as I said, origami is an interest of mine, but not necessarily a passion. (Though I do have Lang's book, Origami Design Secrets, from which I hope to learn how to design my own origami figures.) I don't mean to emulate him completely. But he inspires me to try my own brand of originality, my own synthesis of disparate interests. For the moment, it's an attempt to bring my programming interest into my academic phonetic research. I also have a project on the go bringing programming and humanist spirituality together (stay tuned).

Related to this, being my hero does not mean Lang seems infallible, or even super-human, to me. Of course he is just another person. But that's part of the inspiration: there is no great divide between the kind of person I am and the kind of person he is. I can do amazing things, just like he does.

I suppose that I might more accurately call Lang a role-model. But that has a slightly antiseptic ring to me. A role model sounds like someone your parents expose you to in an attempt to influence you.

A hero - that's someone you choose for yourself.

Portrait of Lang with life-sized origami people from Lang's website.

Image of origami unicorns by Timothy Mills. Models folded by me, from a design in Origami Step by Step, by Robert Hardin, who credits it to Patricia Crawford.